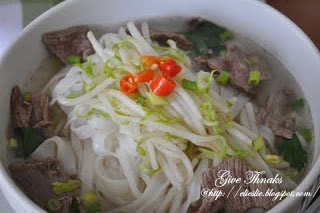 The first time I tried Pho Bo when I was at Central Park. Honestly, I've never tried a typical Vietnamese food before. So when I look around quite a lot of foreign cuisine in peddling in the food court in Central Park, so my choice fell on a dealer who sells a variety of typical Vietnamese noodles.
Vietnamese cuisine can be categorized into 3 sections according to regions.
North Vietnam - has a more simple dishes and get a lot of influence from Chinese (Cantonese), with more use of soy sauce.
French influence can be seen in the region - South Vietnam , which has also received influences from India with curry spices.
Finally, Central Vietnam - which further demonstrate the influence of "pure" taste of Vietnam with a clearer, more seasoned & more colorful.

Chinese influence in Vietnamese cuisine can be seen from the use of many vegetables in the menu & the use of chopsticks at the dinner table.
While donating the use of French cooking techniques - consommé (clear broth) as the basis for making most of the Vietnamese soup, and Pho Bo is famous was actually the Noodle Consommé; the noodles which served with clear broth.
That morning I tried to make Pho Bo for breakfast & trust me ... this is one of the easiest dish that i ever made! The process of cooking & the difficulty   "almost" the same as when we make Indomie with egg & vegetables J
Not believe?
Let's try it! ;)
Ingredients: 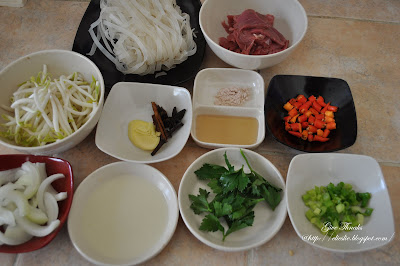 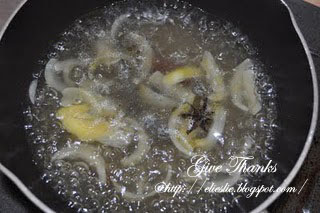 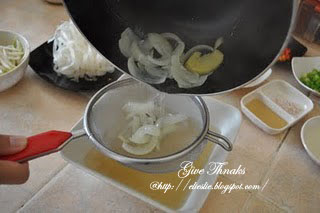 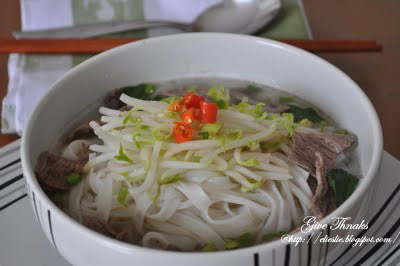 I enjoy the breakfast that morning along with my sister & a bowl of Pho Bo.
Often when we tasted one type of food for the first time, then the moment was the best & think that is to be embedded in our memories.
But for me,this Pho Bo is more enjoyable & valuable than the first - more delicious ... because I make this with my own hand & heart full of love - is more valuable ... because  in return I saw a smile on my sister's face when she said: "Tq Cici!" :) - And I also gained smiled and said to myself "Tq Lord!" :)

“One can not think well,
love well,
sleep well,
is one has not dined well.”
- Virginia Woolf